Despite advances in technology, medicine, intelligence, and health, which have all rapidly accelerated our world into the modern 21st century, humans still have an unusual tendency to point to the caveman as a reference for forging ahead with their meat-eating addiction.

Cavemen roamed the Earth some 30,000 years ago and also gathered nuts, fruit, seeds, legumes, and vegetables (although that seems to get overlooked). For now we’ll just focus on their hunting of animals. They did it to survive. To source nourishment from the flesh, and to use the animal hide and fur for warmth, and as part of their shelter when they weren’t actually in caves.

So why do we travel all the way back to the caveman to justify modern man’s thirst for meat? Because the romanticized version of a caveman carries positive connotations for a lot of people: these men were depicted as hunters; strong, powerful, courageous. Manly men! They provided for their camps, possibly sacrificed a group member or two in the process, but no doubt had to fight off a beast or two. The stuff of Neanderthal legend!

So where are those men now? Those few men (who don’t rely on their wives to hunt and gather) are here, in your local supermarket:

This fine specimen is exhibiting the same traits as his Cro-Magnon brothers. The strength of holding the plastic shopping basket, the courage of deciding between 483 different cuts of animal, and the sacrifice of parting with $12.99, while fighting off other shoppers in the process. The stuff of supermarket legend! He’ll haul his catch back to his cave, where he can flick a switch and cook it effortlessly on his 14-burner BBQ to the delight of his friends and family, who have all no doubt bought mementos from their own successful hunting expeditions.

Being a man in the 21st century can mean different things to different people, and of course the topic of gender could be explored endlessly, but in basic terms, hegemonic masculinity (or the ultimate male) should look something like this: Be strong, aggressive, ruthless, competitive, successful, fearless, & straight. Don’t show emotion, play sport, and be aggressive and ready to fight.

So how does being a man tie in with eating an animal carcass? Anyone….?

The best guess I can make is that manliness is judged by a subconscious link between the aggression, courage, and strength of theoretically hunting and killing a beast, and what we end up with on our table. How we get from Point A to Point D today, compared to traditional hunters, seems irrelevant. As long as you’re tearing into that flesh, it doesn’t matter how it got there, you’re now considered a man.

Has turned into this: 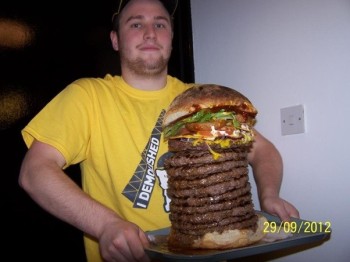 In the view of some people, myself included, a man is better defined by his mental strength and convictions, not his physical prowess. Eating meat does not signify strength of any sort.

So, what makes someone a real man? Or a real human being for that matter?

If we think a man is defined by his propensity to mindlessly gorge into one of these pictured creatures above, while simultaneously treating the other as his best mate in the world, maybe we need to reconsider what being a man really is.

What do you think? Cancel reply